Hashcat is a password recovery tool. It had a proprietary code base until 2015, but was then released as open source software. Versions are available for Linux, OS X, and Windows. Examples of hashcat-supported hashing algorithms are LM hashes, MD4, MD5, SHA-family and Unix Crypt formats as well as algorithms used in MySQL and Cisco PIX.

With the release of hashcat v3.00, the GPU and CPU tools were merged into a single tool called hashcat. The CPU-only version became hashcat-legacy[2]. Both CPU and GPU now require OpenCL.

Hashcat is capable of cracking over 200 hashing algorithms. Many of the algorithms supported by hashcat-legacy (such as MD5, SHA1, and others) can be cracked in a shorter time with the GPU-based hashcat[3]. However, not all algorithms can be accelerated by GPUs.

A hashing algorithm is a cryptographic hash function. It is a mathematical algorithm that maps data of arbitrary size to a hash of a fixed size.

A hash function algorithm is designed to be a one-way function, infeasible to invert[4]. In Hashcat, there are two main ways to crack a hash: 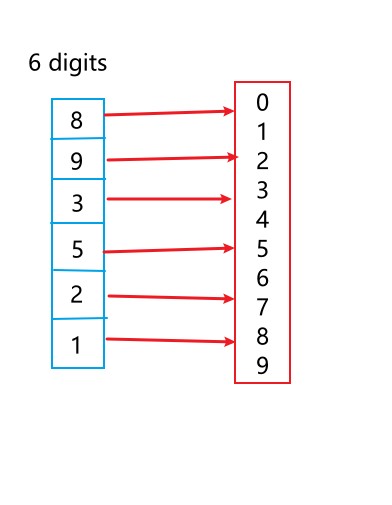 Some form of social engineering can be performed prior to making the attack in order to get an idea of what the target password could be. This could provide a guide for the attacker and make the brute-fore attack process a lot faster. Long, random character passwords could take forever to crack using a brute-force attack on a basic commodity hardware, but this time can be exponentially decreased using super computers.

For brute-force attacks, hashcat uses a mask. A mask is specific set of rules used to tell your cracking utility which parts of a key space should be used. With masks, you can tell hashcat what range and type of characters to permutate and use as it’s ‘guess’ to crack the password. You can learn about masks and how to use them here.

b) Straight Attack, also known as a dictionary or wordlist attack. The main idea of a dictionary attack is to use a wordlist file which usually includes many commonly used passwords. A compiled list of passwords obtained from previously attacked servers like the rockyou.txt wordlist can be make the process even more effective.

In a basic wordlist attack, hashcat takes each word in the provided wordlist as it’s password guess, hashes it using the same hashing algorithm used to make the hash to be cracked and compares the new hash against the original hash. If there’s a match, the guess password is the correct password, else, hashcat takes the next word in the wordlist and tries again.

You can learn more on how to define rules here.

In the image below, the hash to be cracked is the text in red and the text ‘123456’ in our wordlist - when hashed - matches the original hash, therefore ‘123456’ is the correct password.

c) Combinator Attack involves the combination of two wordlists to obtain a password guess. Hashcat takes a word ‘secret’ from wordlist1 and takes another word ‘place’ from wordlist2 and combines them to form ‘secretplace’, then uses this as the guess, hashes it and compares against the original hash. A combinator attack generally takes longer than a basic single wordlist attack for obvious reasons.

The basic usage of hashcat requires at least four arguements: 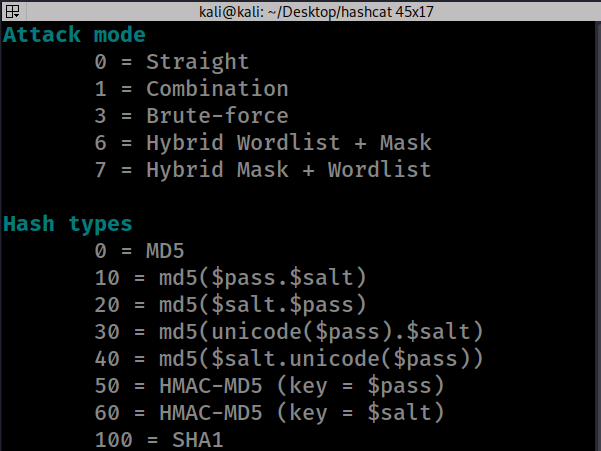 Here we run a basic wordlist attack and we crack the passwords that are one on one matches with words in the wordlist. 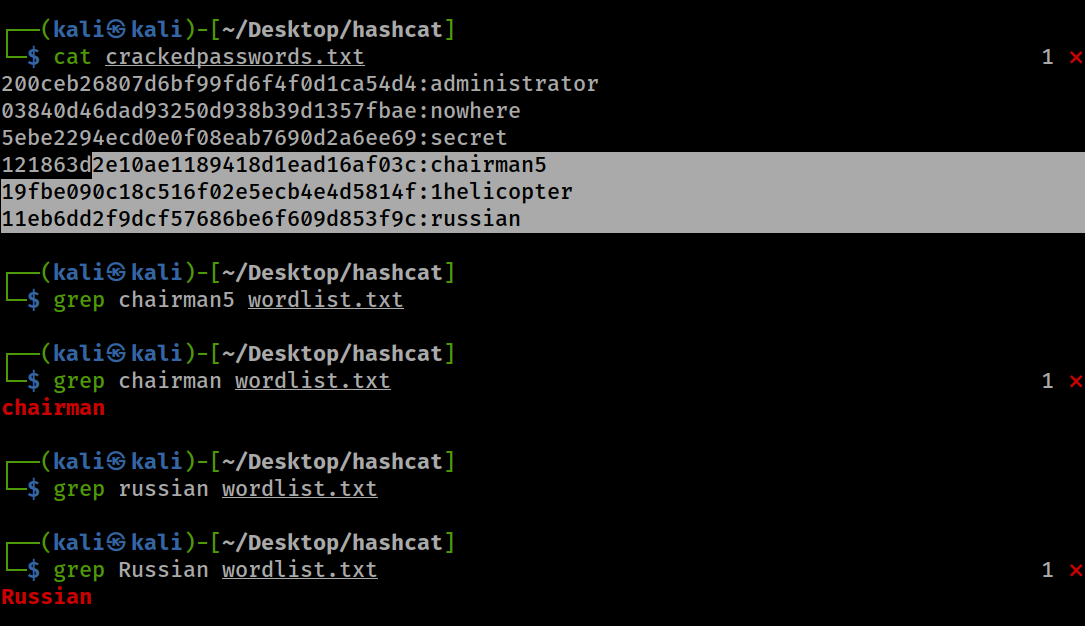 4. Brute-force Attack Brute-force attacks use masks (built-in charsets) to set the range and type of characters to be combined and used for attacks. The image below show the masks. Masks are more efficiently used after some sort of social engineering or if you have an idea of what the password could look like.

With that combination, we were able to brute-force and crack another hash as shown above.

We can see that we were able to crack the rest of the hashes from two characters to five characters containing all kinds of characters.

Your take-away from all of this Use lengthy (at least 10 characters) and unique characters for your passwords.

You can go here to make unique and lengthy passwords. You can also use in-browser password suggestions to make passwords and use password managers store them and help you remember them.