## Signal is a messaging service developed by the Signal Technology Foundation which uses end to end encryption for its services. The software is free and open source, available for use on Android, iOS devices. Moreover, it has desktop versions for Windows Mac and Linux. Signal messages are encrypted with the Signal Protocol and uses a combination of Double Ratchet Algorithm, prekeys, and an Extended Triple Diffie–Hellman (X3DH) handshake.

Signal uses standard cellular telephone numbers as identifiers and uses the Internet to send one-to-one as well as group messages, which can include files, pictures, voice notes, images, GIFs and videos. Messages can also be set to disappear over time, after which they will be deleted from both senders and receivers end. The time interval for this can be varied between five seconds and one weeklong. The features of the application also include one-to-one and group voice and video calls and the application does not collect meta-data like other apps [1]. Signal allows users to automatically blur faces of people in photos to protect their identities. Moreover, the Signal applications on Android and iOS can be locked with the phone’s pin, passphrase, or biometric authentication. Signal also provides the option of sending unencrypted messages and helps to communicate with contacts who do not have Signal.

Signal started off as TextSecure, an encrypted texting program and RedPhone, an encrypted voice calling app. RedPhone and TextSecure were first launched in May 2010 by Whisper Systems a startup company co-founded by security researcher Moxie Marlinspike and roboticist Stuart Anderson. In 2011, Whisper Systems was acquired by Twitter. Under that partnership, they launched Text Secure and RedPhone as an open source software. In 2013, Moxie Marlinspike decided to leave Twitter and resume work on Redphone and Textsecure. Towards the end of July 2014, they announced that they will merge the RedPhone and TextSecure applications as Signal. This was followed by the initial release of Signal as a RedPhone counterpart for iOS. In November 2015, the TextSecure and RedPhone applications on Android were merged to become Signal for Android. A month later, Open Whisper Systems announced Signal Desktop which at that point could only be linked with the Android version of Signal. Later in 2016, the desktop version for iOS was released as well [2].

Signal became popular during George Floyd protests in 2020. Following the death of George Floyd, downloads soared from 78000 to 183,000 as protests grew nationwide [3]. It served as crucial tool for protestors to stay remain anonymous by obscuring faces to both protect their privacy and prevent them being identified and possibly charged later on. Signal is becoming widely known due to its recent endorsements by Elon Musk and Edward Snowden as the app was praised for its security and end-to-end encryption. WhatsApp has been sharing data with Facebook since 2016, but users were able to opt-out and still use the application. However, in January 2021 WhatsApp announced that this option will no longer be possible after February 8 and users won’t be able to use the application unless they agreed to the terms of privacy policy. After the announcement, Signal saw a surge in its users as it was downloaded 7.5 million times over time period of five days. All in all, installations for the application listed on Google Play grew from 10 million to 50 million and this led huge stress on its servers eventually leading to a downtime for its users. Later, it was announced that the servers were restored [4].

Signal offers considerable security features in comparison to its rivals, WhatsApp and Telegram. Signal encrypts messages, calls, metadata of the chat and is designed particularly to minimize the data that is retained about Signal users. It only collects phone number from its users and has no record of any other data not even any data stored on cloud. In 2016, a subpoena was issued to Signal from the government to provide information for two Signal users for federal grand jury investigation. Signal replied that it does not collect any information apart from the date and time a user registered with Signal and the last date of a user’s connectivity to the Signal service [5]. Hence, proving that Signal minimizes information retained about the user. WhatsApp on the other hand collects metadata like whom and when you messaged someone, and for how long and does not encrypt this information [6]. Telegram also collects data like user id, contact information and phone number. The chats in Telegram are not end- to-end encrypted unless the user specifically opts for secret chats feature. In addition to this, the group chats are not encrypted, and no option is there to opt for secret chats for groups. The various privacy features of Signal set it apart from other applications where it provides “Sealed Sender” feature offering protection of user privacy; record of who is messaging who is kept as a secret. In addition to this, application can be locked using PIN or fingerprint. Signal offers the feature of two factor authentication that requires the user to enter an additional PIN while registering Signal on a new device. The Screen Security feature can disable screenshots in Android and prevents Signal previews from appearing in the application. The blur faces on photos feature before sending a message is also an add-on [7]. It also ensures that video calls are end-to-end encrypted. Signal provides private groups: The Signal service has no record of a user’s group memberships, group titles, group avatars, or group attributes. Overall, the cybersecurity features for Signal make it a reliable application, and perhaps the best when it comes to security and privacy.

Signal messages are encrypted with the Signal Protocol and uses a combination of Double Ratchet Algorithm, prekeys, and an Extended Triple Diffie–Hellman (X3DH) handshake. The Double Ratchet algorithm is used by two parties to exchange encrypted messages based on a shared secret key and is built on the core concepts of KDF chains, Diffie-Hellman ratchet and symmetric-key ratchet. KDF chains can be divided into three chains, root chain, sending chain and receiving chain. New Diffie-Hellman public keys are exchanged, and the Diffie-Hellman output secrets become the inputs to the root chain. The output keys from the root chain become new KDF keys for the sending and receiving chains. This is called the Diffie-Hellman ratchet. As the messages are sent and received, the sending chains advance, where the output keys are used to encrypt and decrypt messages. This process is called symmetric key-ratchet [2]. Symmetric key-ratchet and diffie hellman are combined to form the Double Ratchet. Signal’s voice calls were encrypted with SRTP and the ZRTP key-agreement protocol [3].

X3DH is designed for asynchronous settings where one user is offline but has published some information to a server. A second user wants to use that information to send encrypted data to the first user, and also establish a shared secret key for future communication. This protocol uses elliptic curve public keys in the form of Curve448 or Curve25519 [8]. The three parties used to describe this protocol are Alice, Bob, and a server: 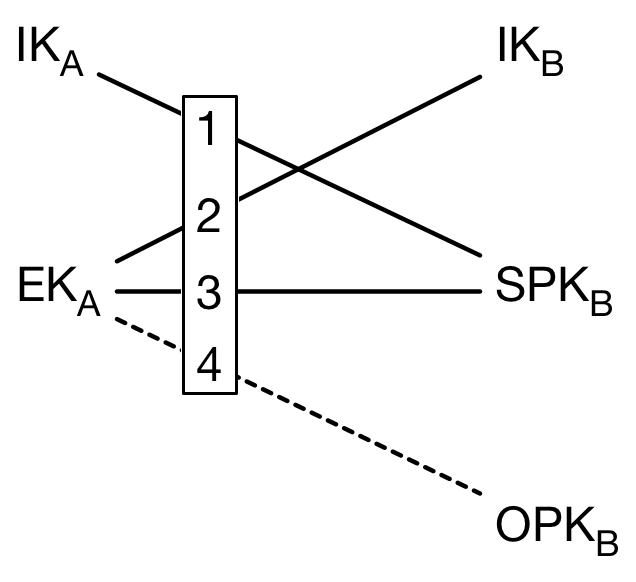 A KDF is a cryptographic function that takes an input, a secret key, a random KDF key, and returns an output. The output is indistinguishable from random as long as the key is not known[9].

The term KDF chains is used when some of the output from the function is used as an output key and some is used as the KDF key for the for another function. The diagram below shows a KDF chain consisting of 3 functions [9]:

A KDF chain has 3 properties:

In a Double Ratchet session, each party stores 3 chains: root chain, sending chain, and receiving chain. The sending and receiving chains advance as each message is sent and received. Their output keys are used to encrypt and decrypt messages. This is called the symmetric-key ratchet [9].

The diagram below represents a Diffe-Hellman ratchet step, it consists of updating the root key twice, and using the output keys from the KDF as new sending and receiving chain keys [9]. 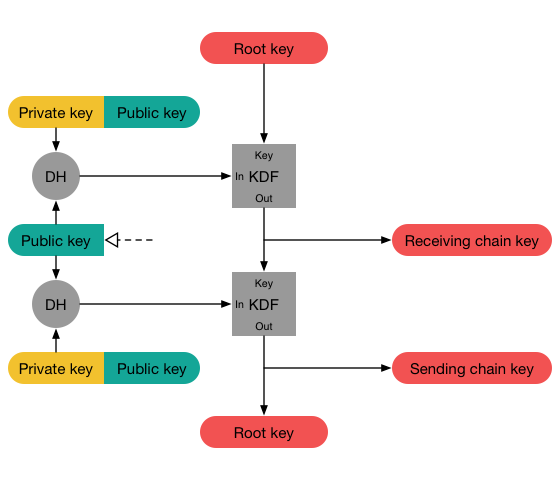 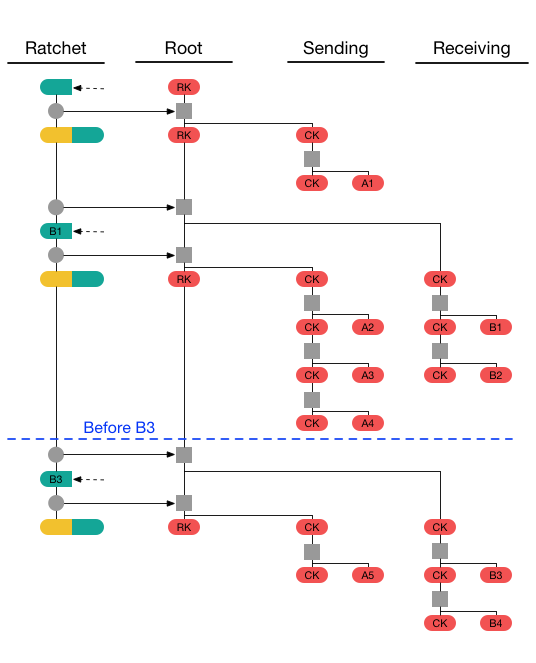 The following code snippet is used to initialize Alice and Bob ratchets:

The following code snippet is used to encrypt messages:

The following code snippet is used to decrypt messages:

Out of Order Messages

The Double Ratchet handles lost or out-of-order messages by including in each message header the message’s number in the sending chain and the length of the previous sending chain. This diagram shows an example where B4 is received before B2 and B3, Alice’s receiving chain will have a length of 1 and it will only have the message B1, so it will store message keys for B2 and B3 so they can be decrypted when they arrive later [9]. 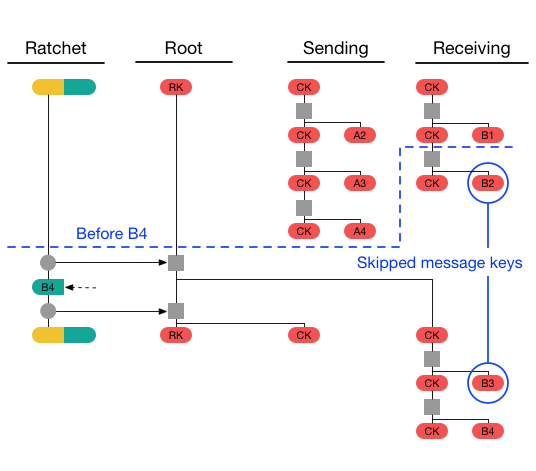 There are two more protocols used by the signal application that were not covered by this presentation or companion notes. If you are interested in learning more about this topic you can take a look at the developer notes published on Signal’s website: https://signal.org/docs/